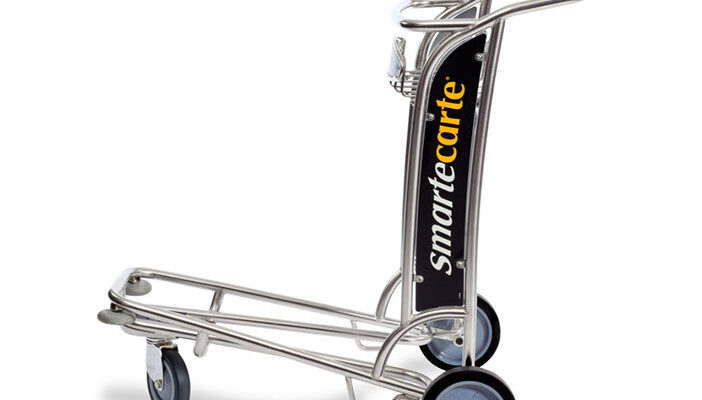 Founded in 1970, Smarte Carte has grown into a global enterprise of 1,300+ employees that service over 1,900 locations worldwide. Their inventory of self-service luggage carts, lockers, strollers, and more can be seen in almost every major airport, train station, mall, amusement park, resort, and fitness club across the world. With their ever-expanding footprint across the world, it quickly became a top priority that Smarte Carte was able to view and access field data in real-time.
window.gie=window.gie||function(c){(gie.q=gie.q||[]).push(c)};gie(function(){gie.widgets.load({id:’mSh_W8FxSEF0ax8nOo2Taw’,sig:’BPadqECLA5iwjNLgbCHqjzMrQuNDrZ9yUn2jAk5uG_M=’,w:’594px’,h:’424px’,items:’501317960′,caption: false ,tld:’com’,is360: false })});

Every day, hundreds of Smarte Carte service technicians are dispatched to various client locations to inspect and service equipment. When service technicians were previously using paper forms, data would routinely come back to the office late or with data errors. These mistakes made it almost impossible for team leaders like Eric Zitelman, Retail Regional Manager, to be able to efficiently track the daily production of their field employees. This is why Eric and several other team leaders at Smarte Carte decided to deploy GoCanvas mobile forms in order to increase the consistency and accuracy of the data collected at client locations.

Mobile Forms for a Modern World

For Smarte Carte, the deployment of GoCanvas mobile forms started with a pilot of 450 fitness clubs across the United States. The reason? Eric Zitelman and his fellow regional team leaders needed a better way to track the daily productivity of their field service technicians.

With GoCanvas, Smarte Carte was able to create mobile forms that require service technicians to collect all the key pieces of the information about the equipment they are inspecting before they are able to submit it. Once completed, the technician reports now automatically transmit directly from their mobile device to their regional supervisor. This allows for the instant analysis of each report in real-time, as well as the tracking of productivity of each technician on a daily basis. Due to the success of the pilot program, Smarte Carte now uses GoCanvas across 1,600 fitness clubs!

Since then, Smarte Carte has expanded its use cases to include everything from Field Service Reports to Driver Time Logs. These mobile forms utilize features such as:

These features help Eric and the upper-management at Smarte Carte to quickly verify the accuracy of all the data being collected, as well as to generate highly detailed reports. This enables them to track critical performance KPIs on the backend and to make proactive decisions within their global operations process.

The Impact of Smart Forms for Smarte Carte

Since starting with GoCanvas in 2017, Smarte Carte is still finding new ways to integrate GoCanvas mobile forms into their various departments and workflows. In their first year of using GoCanvas to replace paper reports, Smarte Carte has captured and stored over 26,000 digital records. This has resulted in a recovery of over 200 hours per month in productivity!