Movie mondays: why James Bond should be your startup guru

When you think of James Bond it's usually martinis, women, and epic chases. But last week, I was watching Skyfall and it occurred to me: James Bond was actually a startup guru (it surprised me too).

With flashy suits and high end cars and watches, James Bond screams high end, not bootstrapped. Still, he finds himself in a rough fight at the beginning of the movie. As he chasing his target, he rams the car and loses the mirrors in order to to maintain his speed. These cuts as he chases his target allows him to get closer than otherwise (sneaking M and Kincade out of the house and into safety). 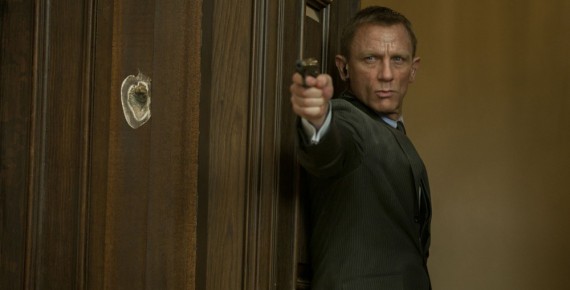 When starting a new business, you're in a brutal fight. 75% of startups with venture capital never return on investment. This is a huge risk for those starting. You're taking out credit, borrowing from friends and family, or tapping savings. In this fight, taking after James Bond is smart: go as lean as you can be. Here are some ways GoCanvas kept lean the first few years.

Beginning a startup is never easy. You may not cut as tight as we did. But always ask yourself: is this helping me move forward, or is it what I think I need to move forward? As your racing forward, keeping lean will help keep your costs down and limit your risk.

In the very first fight scene, Bond and Eve, a female agent, are chasing a target. When the target jumps onto a train, Eve stops. But Bond? He continues on a motorcycle and jumps onto the train.

Even after Bond was shot. He decides to return to the service. Even though he's weaker, been out of the service for months. When everyone else assumed that an agent was done, Bond questioned it. He showed up. In the end, Bond uses Q as bait to draw out Silva, and give Bond an advantage.

To create a great new business, often times you have to fight assumed truths. At GoCanvas, we questioned the validity of paper as the best means for business information. Facebook wondered if we would go social online. Just because someone says it's always been one way, does it have to remain that way?

It isn't easy, and often it takes accountability from others to help ensure continued questioning of truths. But when you do, you push yourself further, and will uncover more success than stopping at the status quo.

Bond is king of taking what's around him and using it to his advantage. A CAT excavator becomes a tool in Bond's first fight in Skyfall. He takes a simple hat and pair of glasses to blend into his surroundings (despite his fancy suit). Oh and don't forget the fight scene with the government: he shoots a fire extinguisher to obscure the room and end the gunfight.

As a startup, you have different resources and potential advantages compared to other companies. For instance, when you're looking to hire talent, you may not be able to pay the highest salaries, but what about offering bigger vacation packages? What about creating a more flexible schedule for your employees? Startups need talent. By reimagining what you can do, you can bring on a class players.

After returning to MI-6 Bond cuts out shrapnel from his chest. These pieces are crucial: the unique bullet allows MI-6 to begin tracking down the assassin from the beginning of the film. Creating a false data trail is also important in taking the upper hand when fighting Silva.

Data as king isn't new: IBM's study of CIO's in 2011 showed that 83% have plans that include business intelligence and analytics. You don't need to be a fortune 500 company to collect and analyze data. Some information you can collect include:

“How much do you know about fear?”

Severine pushes Bond on his emotional intelligence. EQ is crucial not only for spies, but also startup success. Photo credit: MGM

This is the question that Severine asks Bond early on in the film. He responds, “all there is.” Whether or not this is overconfidence, both of these characters understand the importance of emotional intelligence.

Emotional intelligence, known as EI or EQ, is becoming huge in business. This is the ability to monitor and control your own emotions, as well as the ability to read others and work with their emotional landscape. Bond plays into Severine's fear of Silva, making it seem like he's trapped on the island. Instead? He plans on this and is able to capture Silva there.

Why does this matter to startups? High EQ is correlated to success: In an international study of executives from North and South America, Japan, and Europe, EQ was a better predictor of success than either relevant previous experience or high IQ.

Your risks may not be life or death, but your ability to regulate emotion and understand it could be a crucial factor in making your startup a success.

Skyfall  ends with a fight in a dark old Scottish manor, Bond's family home. Here, he purposefully uses M as bait, luring Silva up to the moors. Bond risks M's life in order to set the stage for the final battle in a territory he's familiar with (and with as fewer civilians around for collateral damage). Bond risks M's life, and the potential for her capture by Silva, in order to defeat him.

To be fair, James Bond may know nothing about revenue, costs, or dealing with the IRS. But watching Daniel Craig as James Bond isn't just easy on the eyes. He shows the courage, ingenuity, and resourcefulness of the best startups. With so many spy movies coming and going, maybe this is the reason why James Bond is still at the movie theater, more successful than ever.

Discover the tool businesses around the world are using to save hundreds of hours a year. Learn how in our free ebook: