Ben C. sells a lot of popcorn.  Just 12 years old, he ranked 5th in the nation last year for popcorn sales in his Boy Scout Troop in Schenectady, NY.   Every year his Council, Twin Rivers, holds a popcorn fundraiser where cub scouts and boy scouts sell 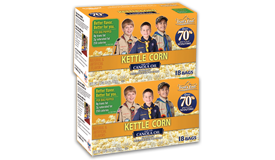 Trails-End gourmet popcorn to help pay for their summer camp, go-see-it visits to Battleship Cove and national parks,  Jamborees, community service projects, and gear like canoes and tents.  These events and supplies can be expensive, so Ben knew he had to be more efficient in his sales.  He wanted to improve the current order-taking process for the popcorn, which used paper forms and a clipboard. Often the paper would get wrinkled, lost, and had very small areas for customers to scribble their information.  He knew there had to be a better way to keep track of  orders.  Then he got the idea of going “paperless” from his dad’s workplace when picked up a brand new Motorola XOOM tablet.  After using it for a few minutes, Ben wanted to use it for his popcorn orders.

Ben and his father searched out an app for order forms and found GoCanvas.  He uses GoCanvas to take the customer’s order right

on the spot, sending the orders immediately to his popcorn kernel adult leader.  They went further and modified the app to collect his customer’s email addresses and to record payment and delivery information.  He uses the emails to follow-up with previous year buyers first (that way he can spend more time prospecting) and to thank them for supporting scouting.   He doesn’t like to take “No” for an answer so he encourages people who don’t buy to instead make a military donation to send popcorn treats to our troops serving overseas.

Ben has been able to grow his sales since launching his GoCanvas App.  GoCanvas wishes him and Twin Rivers Council much success this popcorn season!