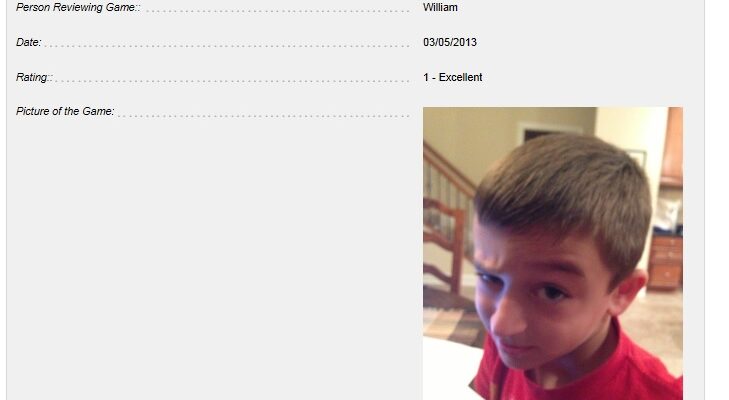 Since I joined the GoCanvas team as Chief Marketing Officer a few months ago, my two young sons have been after me to show them how the GoCanvas App Builder works.  I finally sat down with them a few nights ago and walked them through the steps to authoring mobile apps.  Almost immediately, my five year old pushed me aside so he could get in front of my laptop to start building his dream app – A Video Game Review App.  He decided on the fields he wanted to include and then we talked about the best way to execute his vision.  We uploaded reference data in an excel file to indicate who would be permitted to submit reviews.  He decided to limit reviewer rights to his brother, his parents, his babysitter and himself.  He then decided it was critical to have a picture of the reviewer making funny faces as part of the PDF output, as well as the reviewer’s signature so, as he says, “it will make the review official.”

I enjoyed watching my young children easily master the GoCanvas app building toolkit.  They started talking about all of the apps they wanted to create, including a birthday gift giver tracker, an app to catalogue their Lego inventions and a host of others.  GoCanvas was built as a business tool but once you let people loose in the App Builder, all kinds of consumer and personal uses come to mind.   Want to track whether or not you gave your cat its medicine?  Build an app.  Planning to host a blind wine tasting and need a score sheet?  Build an app. Donating shoes and clothing at one of those kiosks in the grocery store parking lot and want a photo and catalog of items for a tax record of your donation?  Build an app.

App building is a skill all children would benefit from mastering, just as they would basic programming.  If you haven’t seen it yet, this inspiring video from code.org has been circulating around the Internet.  The video suggests that coding should be taught in school alongside reading, writing and arithmetic.   The opening slide of the video reads, “Everybody should learn how to program a computer…because it teaches you how to think.”  The author of that quote?  Steve Jobs.

After showing my children the GoCanvas app builder, I played the code.org video for them.  When it was over, my older son slammed the laptop closed, looked me dead in the eye and said, “That’s it, mom.  I’m sold.  I want to learn computer programming.”  Another great app you can build using GoCanvas?  Computer programming summer camp session tracker.