Nielsen has recently published Smartphone deployment stats for the United States.   The stats are outlined by Smartphone OS and Marketshare and represent sales between November 2010 and January 2011 .   Interesting items to note that Android, Apple and BlackBerry now own 83% of the market and clearly that share is growing.   GoCanvas now supports ~85% of the Smartphone Market with the GoCanvas Smartclient.

Interesting to see HTC and Motorola surrounding the Apple and BlackBerry juggernaut.   Android has clearly maintained their lead but has not increased the distance between iPhone and RIM.  Clearly as well the deathbells that have been sounding for BlackBerry for years now have clearly been overstated. 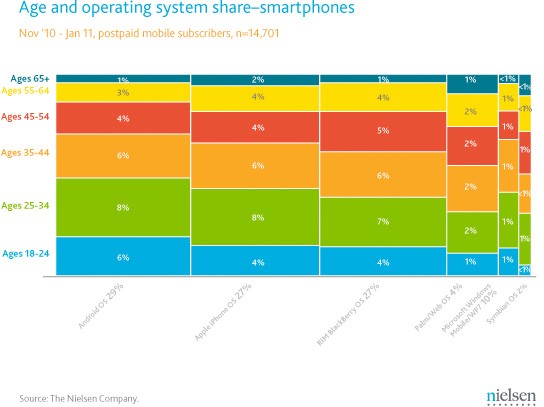 The other interesting statistic Nielsen has come up with is that Smartphone deployments are clearly becoming the standard of the under 44 crowd.   We are coming into an age where people won’t be upgrading from feature phones to Smart or Superphones/Tablets.  These users are getting as their first phone Smartphones and are immediately accessing applications and the internet.