User Experience is Everything: The Pininfarina Coke Machine

As engineers, developers, sales and business people we sometimes get lost in what works and not what feels good, is completely intuitive and what delights beyond features. User experience is around us in everything we touch and interact with. The Pininfarina Coke Machine at one of our company's local hang outs is just an amazing example of UX that delights.

I am new to the church of UX, but I can tell you our whole company is sitting in the first pew now and big believers.   We are in the

midst of a completely new look and feel of our own service.  That being said, we are always impressed when the “Design of Everyday Things” makes us smile in new ways.   So coming upon something as simple as a Soda Machine, that could make us smile is amazing.

Pininfarina the company behind the Ferrari P4/5 is the design firm that partnered with The Coca-Cola Company in designing the look and feel of the exterior of the Coca-Cola Freestyle. The vending machine itself looks like the clean design elements in a high end Ferrari, rounded corners, compact design and high gloss bold colors. The Coke swoop reminds one of a racing stripe.  It just looks like a Ferrari. This is not one of your normal, boring soda machines.

The Pininfarina Coke Machine interface and UX is so clean and simple. It goes beyond the UI of the control panel.  Something as simple as where the soda dispenser is, and the fact that its “solo” slot speaks to the fact that making this so incredibly intuitive was an  even unlike other fountain machines, you know exactly what to do, you don't question even where to put your cup.  Sounds simple, but watch a person step up to a standard fountain vend machine.  There is a delay on where they should put their cup and what button to push. Let alone finding that little button if someone wants water.  You have to put your cup somewhere else for ice and then move it somewhere else for the soda.  We are all used to the process, but here you have once choice and it looks clean surrounded by stainless steel and a oval-shaped entry point.

Beyond Pininfarina, Coca-Cola brought in designers who had worked on early versions of the iPod UI to help design the control

panel. The control panel UI, is simple and elegant. Round three dimensional buttons, that make you want to interact with them. A button for each soda type, and here is where things get interesting. After selecting something like Coca Cola or Diet Coke – you are then presented with a number of Sub-Selections. Where you can choose sub flavors.

This takes what a normal soda machine and can dispense which is somewhere around 6 sodas and turns it into over 150!  Ok sure 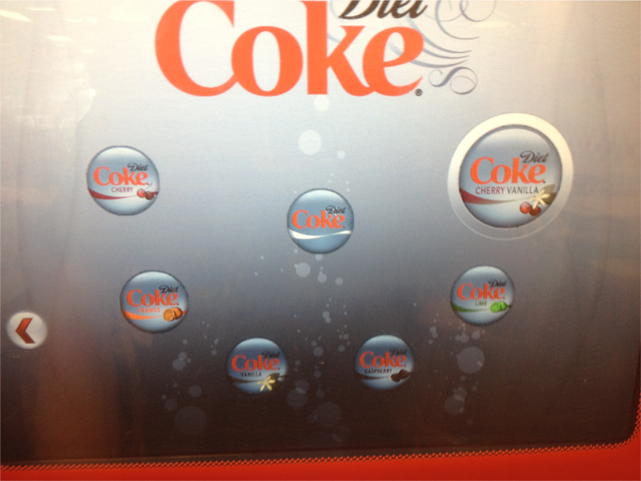 how many times is someone going to choose Hi-C, Orange Vanilla… but the options presented seem to fit the brands and the flavors making them most appealing.

Coke worked closely with Dean Kamen the inventor of the Segway as well as an amazing invention that allows for microdosing of prescription drugs.  He took that concept and married it to dispensing soda.   So instead of bags of syrup and CO2 the company used a cartridge-based soda dispenser. Some of given the analogy of think of this like a printer, with the cartridges filled with concentrated flavorings.   The cartridges, which last 75-120 days, live inside the machine except for high-fructose corn syrup, which is piped in from a larger vat.

We think Donald Norman would be proud of an elegant and customer driven look and feel with few options that steer you wrong, incredible user feedback on choices and in the end a very functional product that delights.