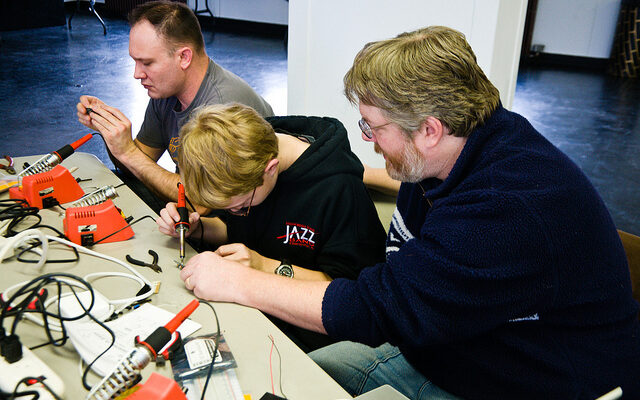 Lessons From the Makers: What the Maker Movement Can Teach Business

We’re so excited about the Maker community that we’re going to donate three copies of the awesome book Zero to Maker to help you become a Maker. Just share this post on Twitter with #CanvasMakers attached to it and you’ll be entered to win. We’ll be picking three winners 10/31/14 at 12 PM EDT.*

My world got rocked last week. For the past 5 years, I’ve been a diehard startup junkie. I was vaguely aware of the Maker community, but I had no idea how impactful and inspiring the community was.

The Makers are changing the world. Their community is an incredible fusion of several different philosophies. To understand the Makers, first take the DIY principles of self-sufficiency and combine it with modern technologies like 3D printing and robotics.

Then throw in some of the hacker ethic, “the idea that knowledge should be shared with other people who can benefit from it, and that important resources should be utilized rather than wasted” as stated by renowned programmer Richard M. Stallman.

Put all of these ideas together and you’ve got the Maker Movement.

Whether you want to learn to make a clay figurine to use in filmmaking or your very own universal translator, the maker community has your back. The goal is simple – create for creations sake.

The maker community contains a number of awesome and innovative startups, from mobile payment company Square, whose first prototype was created in a Makerspace, to Makerbot, a 3D printer designed to be used by Makers.

But it goes so much further than the startups – the community also contains hobbyists and part-time makers, people who build things for fun and personal fulfillment.

The message of the community is clear – if you make things, you are welcome.

Maker spaces aren’t just in the United States: They’re addressing complicated and difficult problems in the developing world. One organization bringing maker spaces to the developing world is Communitere. They created a Makerspace in Haiti after the 2010 earthquake. By doing this, they’ve brought Maker ideals and skills to disaster zones in developing countries. They aren’t only giving locals the tools to rebuild their community, but also teaching them the skills required to maintain it.

Sam Bloch, the executive director of Communitere was kind enough to stop by Refraction and talk to us about the work he does. During his talk, something clicked in my brain. Seeing how they are harnessing the power of the Maker community to help build up the developing world was incredibly inspiring. The Maker movement has managed to inspire and connect people all over the world, from high school students to PHDs, from tech billionaires to citizens of the developing world.

And it has done so based upon a set of simple, but powerful principles.

While we can’t all be using the ideas of the Makers to help rebuild disaster zones, we can all learn to apply some of their principles to our own work. Because they’ve managed to hit upon a fundamental factor in the way humans are wired to think, work and play.

Makers consistently hammer home the deep connection humans naturally feel with things that they’ve personally created. The human brain places a higher value on things that it has personally contributed to crafting. 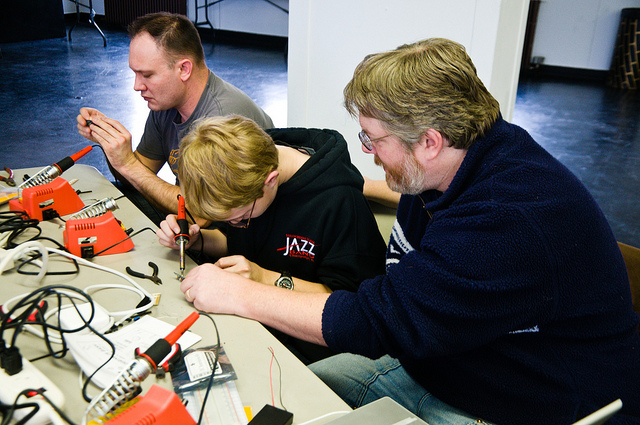 We feel intrinsically different about things we’ve made. Whether it’s a drone or a table. Photo: Mitch Altman cc 2.0

Sam tells the story of a Hatian man who built bunk beds for his children following the earthquake. The simple act of creating reinvigorated this man’s belief in his abilities to provide for his family.

The opposite is also true – if people feel like they have no power in creating things, they value them far less.

This has huge implications for startups. One of the best ways to encourage employee loyalty is to make sure they know that their work is actively building the company. Sometimes in the chaos of running an early stage company, everyone does so many different tasks that it’s impossible to truly feel in charge of a project.

The best way to harness the innate maker drive in all of us is to assign clear and actionable metrics for success to each employee. When someone knows exactly what goals within the company are theirs to own, you’ll find that people will move mountains to achieve success.

A space is more than a space

Makerspaces are the core of the maker community. A community built upon creating things obviously needs a physical space – that’s where Makerspaces come in.

From advanced 3D printers to laser cutters, Makerspaces provide the gear Makers need to get their work done. 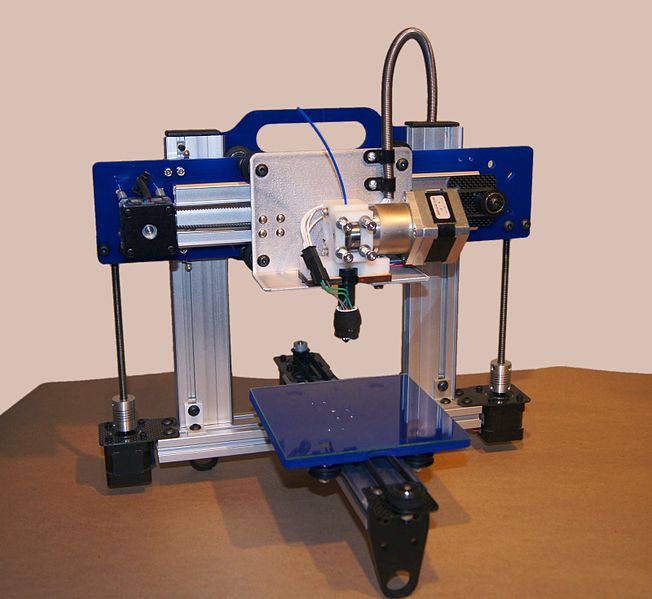 But the real value in Makerspaces is the community, both organized and organic. Stateside, they have Meetup groups, with organized events and speakers to help members learn specific skills.  Communitere delayed opening their new space in the Philippines to ensure that the full community would take part in the space. In addition, they gave sponsored membership to those directly affected by Typhoon Haiyan. These sponsored members were given time in the space before it was opened to the wider community, to give these members a sense of ownership that they don’t often have in public spaces.

But just as important is casual mentorship, when Makers naturally work together and help each other with their projects.

Collaboration is king in Makerspaces. The very concept of a Makerspace is about cooperation – group of Makers banding together to buy equipment and space which they wouldn’t be able to the individual members couldn’t afford.

It’s easily apparent that teamwork is in the DNA of Makerspaces. Collaboration takes many forms in Makerspaces. From the organized classes on topics such as 3D printing & laser cutting to the dynamic mentorship as an experienced Maker shows a new member the ropes, the best Makerspaces have found a way to cultivate true cooperation.

There’s a simple explanation for this – “A hackerspace isn’t a building. It isn’t soldering irons, CNCs, or parts bins. It’s not classes, or libraries. It’s a community.” By forging a bond that transcends the physical resources of the space, Makers are able to forge a tight knit bond that makes it infinitely more valuable.

From the Makerspace to the Office

So how can we bring this spirit into our companies and offices?

Replicating the collaborative nature of the Maker community is no easy task. This can’t be some side effort that you tack onto your business – you’ll be wasting your time. You will have to completely commit to the maker mentality. But if you do decide do, you’ll see insane benefits.

The way to do this is both incredibly simple and excruciatingly difficult, you have to create a community where people happily share knowledge and teach each other. This enables information to freely flow through your organization. Suddenly, you’ll find that your employees and colleagues are better informed about every aspect of your business, from building to selling.

Sharing knowledge in business settings works best when it is done in the same way as Makerspaces, by combining organized and dynamic information flow. Planned events like lunch-and-learns or guest speakers can help your employees find new intellectual passions (in fact, Sam Bloch of Communitere was a guest speaker at our offices, sparking this piece).

But just as important is the natural, day by day information flow that occurs when employees share information and tips without any sort of inclination. There is no one trick to getting this to happen. Rather, take the time to explain things to your employees and coworkers. More importantly, ask them questions about things they are good at.

Day by day, bit by bit, you’ll be working towards the creation of a more open environment.

If you’re like me, after learning about the Maker movement, you want in. Well, we want to help. The awesome book Zero to Maker is a step by step primer for getting yourself up and running as a Maker.

If you want to start Making, this will be a fantastic resource. And we want to share it with you. Just share this post on Twitter with #CanvasMakers, and we’ll enter you into a raffle to win one of three copies of Zero to Maker. We’ll be picking the lucky three winners 12 PM EDT 10/31/14.

Discover how businesses are becoming faster and smarter with mobile apps. Learn more in our free ebook: