GoCanvas Launches on Apple Newton! Leading the way as the provider of innovative mobile biz apps! 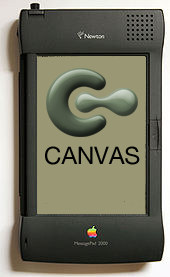 “With the new ARM 610 RISC processor, anything is possible!” stated James Quigley, CEO of GoCanvas “Users can even use hand writing recognition now within GoCanvas, even if it isn't that good” GoCanvas also announced the decision to only support OS2.0+ of Newton and not the earlier 1987, OS1.0 model.  “We only support the latest versions of Apple products, we understand this may limit our devices supported but we think it will assure the best version of our solution is available to our subscribers.”

Other features of note with this version of GoCanvas include the use of both green and black colors, bringing back the stylus, the oversized screen which is one of the few devices bigger than the Sprint 4G EVO and the cool plastic casing.

“GPS, image capture, parrallel processing, wireless communication, and more than a few MB's of RAM/ROM are really just overated”  stated Matt Warner, Chief Architect of Mobility at GoCanvas.  “We are thinking of rolling out GoCanvas for the first PALM pilot devices next!”