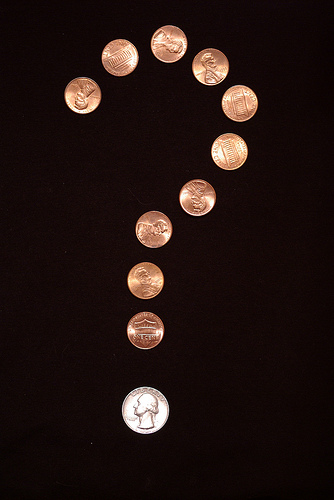 At GoCanvas, we love startups and tech companies. Nothing makes us happier than seeing a passionate group of people go out, solve a problem, and change the world. We’ve been thrilled to watch the growth of the global startup community (as well as playing a part in it) over the past several years.

Fueling this continued growth requires investment money from angel investors, venture capitalists and other institutions. As we closed our recent funding round, I found myself wondering about startup investments. What are the trends in investment? What areas are quickly growing their investment amounts?

To find out, I headed over to Crunchbase , an awesome website run by Techcrunch which aggregates tech company funding data. They make it easy with a data export option to download their full dataset, allowing me to go in and download an Excel spreadsheet detailing the history of startup funding.

So I dug into the list and see what I could find. Particularly interesting to me was the information on funding rounds from 2004-2015. I decided to poke around – check out my observations below.

Note: All data was taken from the funding rounds export of October 2014 Crunchbase data export. This data was then filtered to only include angel, convertible note, equity crowdfunding, grant, product crowdfunding, seed and venture rounds. I looked at the past ten years: 2005-2014. If you do this to the October export, you should be able to replicate my numbers if you want.

1. The  top type of company funding is surprising (but the rest aren’t)

One of the first things I wanted to look at was how well different types of company do when being funded. How do cloud companies perform? What about social media? I can honestly say I was pretty floored by the results.

Turns out that biotech is far and away the largest area for investment, picking up $37 billion over the past ten years and $6 billion in 2014 alone. I knew biotech was huge, but I didn’t know it was that huge.

The rest of the categories rounding out the top ten are what you would expect. Enterprise software and mobile, two types of company close to our heart, put in a strong showing. Each received upwards up $10 billion in investment. 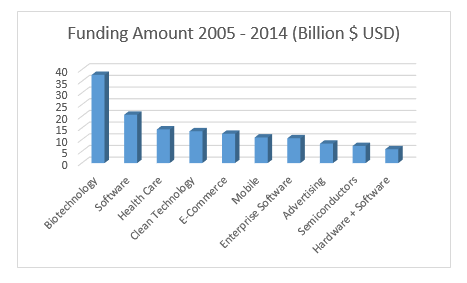 2. The tech landscape is changing

But what up about the up-and-comers? What are the types of companies which we can expect to lead the way in the next generation of tech?

To find this, I looked at the number of rounds (not amount of rounds) that different types of companies had raised in 2014 compared to previous years. I went with numbers of rounds rather than amount of money raised for this one, because we want to make sure we get the future disrupters raising their seed and series A rounds.

Turns out there’s a bunch of cool industries getting off the ground. – There’s artificial intelligence, which had almost as many investments this year as it had in the three years prior. Another new and potentially disruptive tech, 3D printing had massive growth compared to last year. And then there’s bitcoin – with 400% more funding rounds this year than 2013!

Of course, some more down to earth categories are doing well too. 2014 was an excellent year for startups in industries like shoes, home & garden and tourism. As technology increasingly creeps into every industry, don’t be surprised if you see more and more “traditional” industries become hot areas for new startups.

It won’t come as any surprise to anyone that software continues to be the dominant medium for investment. Although hardware, the internet of things, and 3D printing are growing rapidly, they haven’t quite reached maturity.

Personally, I wouldn’t be too surprised to see this even out a bit as smart, connected devices start becoming more mainstream. The tech incubator and coworking space that has been so crucial to the software scene is starting to see serious parallels in hardware. Makerspaces are the coworking spaces for physical things and they’ve been spreading at an incredible pace recently.

For now though – software is still head and shoulders above hardware as far as number of funding rounds go.

I was also curious how mobile & enterprise businesses stacked up

4. Silicon Valley still dominates, but tech startups are around the world

When we think of tech startups are, there’s one place that comes to mind first – Silicon Valley. This is the place that spawned Google, Facebook and Amazon. A lot of people think that Silicon Valley is the only place to go for tech startups. They aren’t entirely wrong: the SF Bay Area has been home to 1280 funding rounds so far this year – more than double that of the #2 region (New York).

The power of the technology and the internet allows people from all over the world to take a good idea and run with it.

5. DC is establishing itself as a top tier tech city

I couldn’t resist the urge to check up on the DC tech scene. The DC region has 138 rounds listed so far in 2014, making it the 7th highest region for startup funding in the world!

Note – in this regional calculation, northern Virginia and some parts of MD are included in the calculation. Of course, this holds true for other regions, so for example the SF Bay region includes the surrounding area as well.

And with Optoro, Trackmaven & ourselves here at GoCanvas all closing major funding rounds this week, the trend looks like it is going to be continuing. Great work DC! Here’s to many more years of incredible growth!

There you have it – my takeaways from looking over every startup funding round over the past 10 years. The global startup scene is growing, spreading and evolving. Enterprise mobile and software are still huge players, but there are all sorts of new and interesting companies being funded across a variety of channels, from artificial intelligence to bitcoin and the internet of things.

Overall, the sheer growth in numbers of funding rounds and amount of fundings as well as the global nature of the community can only be encouraging to anyone who is interested in startups. No one knows what the future holds for startups

But we’re excited to find out.